Note: A newer post Migrating Open Source projects on Travis CI to fix GitHub API limit problems has information on how to fix the problems described below.

Last week, GitHub’s Dependabot created a pull request with a fix to a vulnerability found in the development dependencies of one of my FOSS projects. This was a bump to Mozilla’s bleach, a project that GitHub states is used by more than 61,000 other projects. 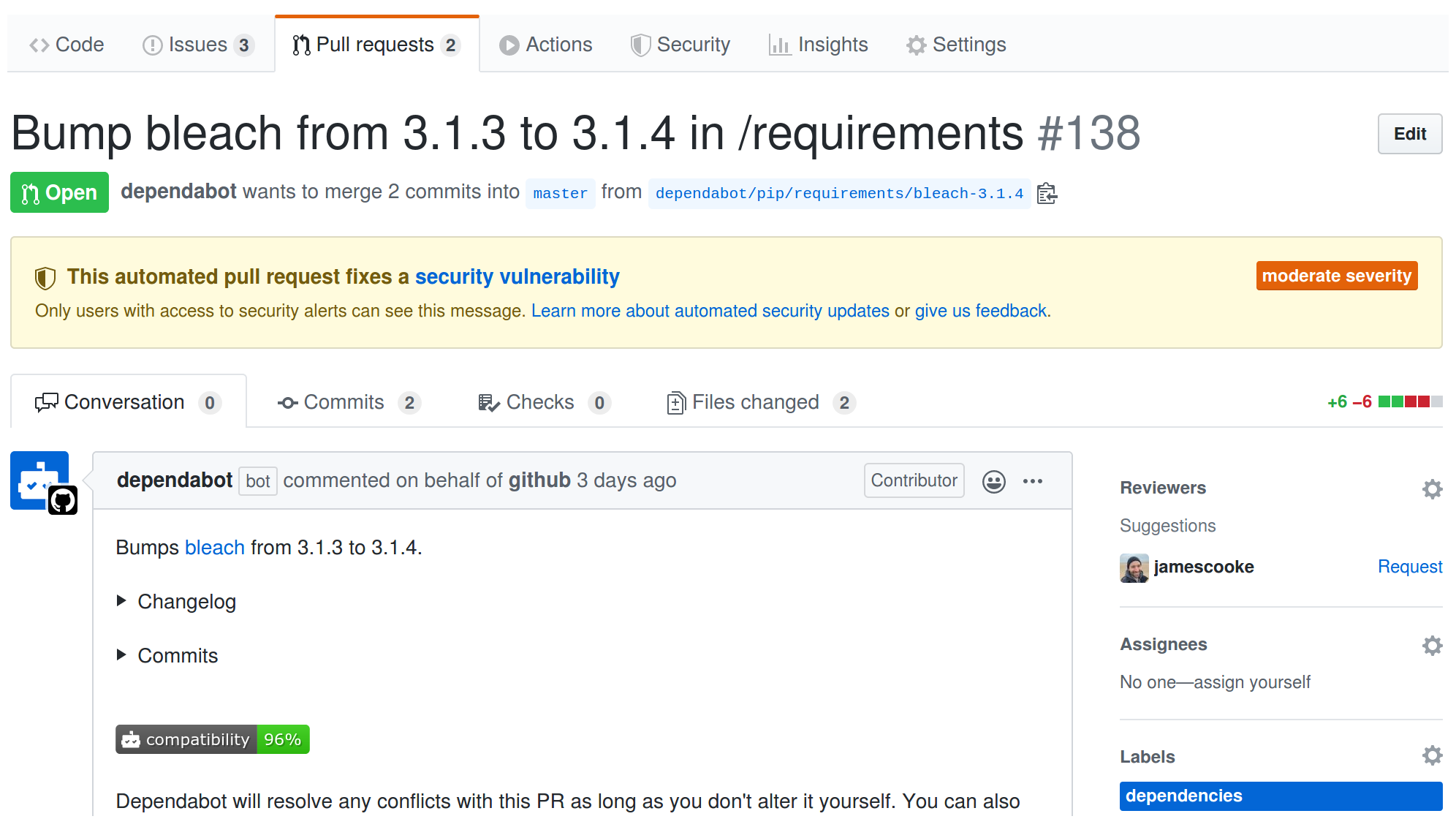 Flake8-AAA’s repository is wired into Travis CI to provide automated execution of its test suites across all supported versions of Python. Better still, because Flake8-AAA is an open source public repository, Travis provides the computing power to run these tests for free. I’ve always found Travis reliable and stable, so it’s a requirement that pull requests have a “green” Travis build before merging into Flake8-AAA’s master branch.

However, when I checked on the Dependabot Pull Request, GitHub was still waiting for the status of its Travis build to be reported.

You can see that the “Merge pull request” box is greyed out because the required Travis build has not completed yet according to GitHub.

But here’s the build at Travis - both green and done within 3 minutes of Dependabot opening the PR at GitHub, so the call from Travis to GitHub to report the build status on the commit failed for some reason.

Sometimes webhook and API calls to GitHub fail - I’ve seen this with both personal and work projects. Often the simplest solution is to retrigger the build in some way. At first I tried to get a follow up build to work by:

All of these strategies had the same effect - a new build was triggered on Travis and that build was green, but it was not reported to GitHub. So it looked like all API calls were failing from Travis to GitHub.

Next, while checking the GitHub status page and Travis status page, I found this status update on the Travis site: 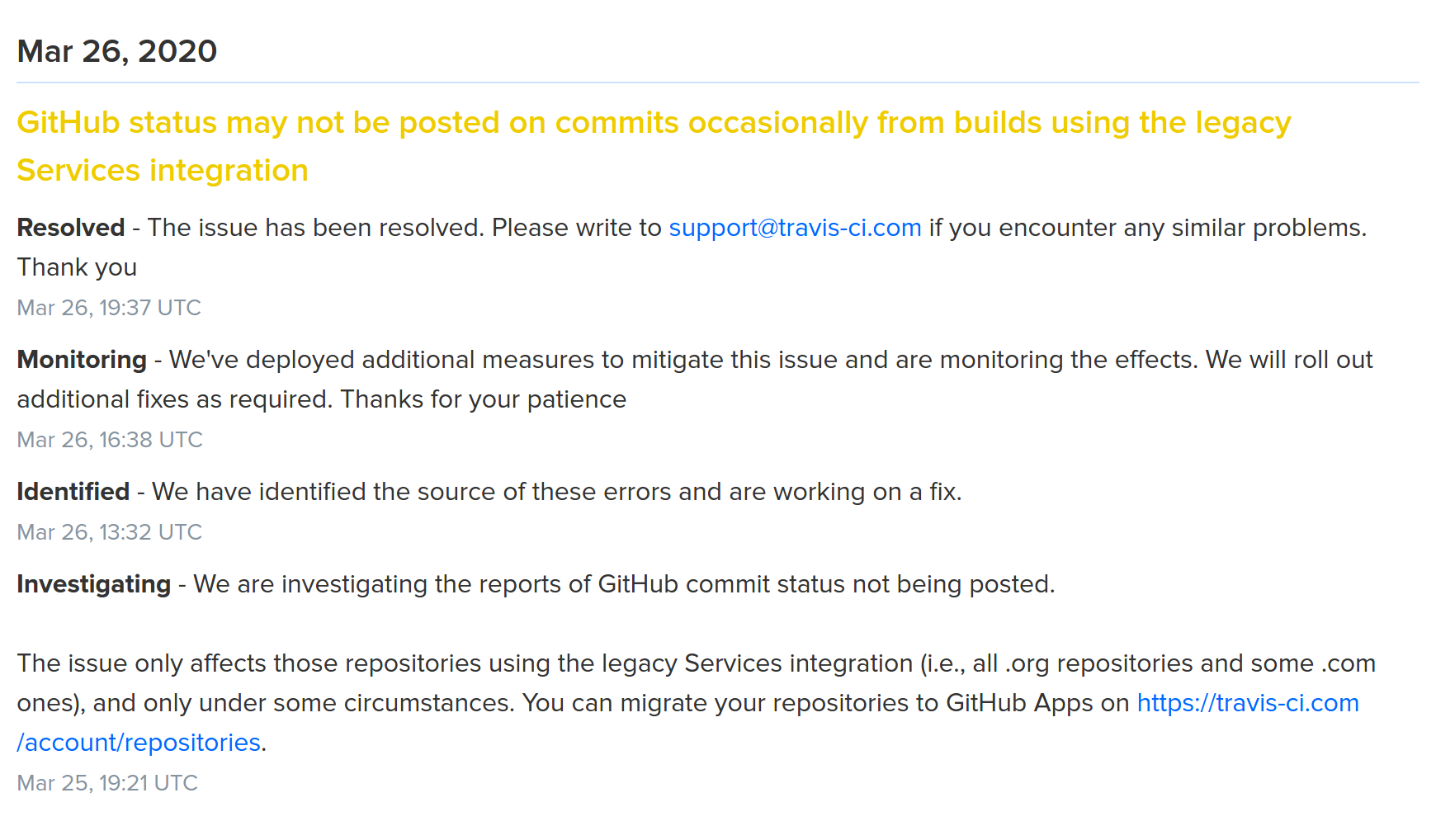 In light of that status message, I tried installing the Travis app integration, but had no success getting it to link to Flake8-AAA.

Please write to support@travis-ci.com if you encounter any similar problems.

Here’s the full text of the reply from Travis support:

Thanks for your patience on this issue.

We want to provide some visibility into the issues we are facing, the effects on our infrastructure and efforts made so far to restore normalcy.

We know how critical our platform is to your business and our goal is to provide the best experience for our customers. In line with this, we extend our sincere apologies for inconveniences this is causing.

Thank you and we will provide periodic updates as we have more.

Firstly, thanks to Travis support for this helpful message - it’s pretty unusual for a service that offers a free tier to be open and responsive to messages from freeloading users like myself.

Secondly, I assumed that Travis would not be opposed to publishing the text of the email since it should help other developers in my situation.

In response to the mail itself:

Update: Since writing this post I have successfully migrated projects to Travis dot com. My next post has a list of items to remember when migrating.

Although I’m happy with the Travis response so far, I’m worried about what this means about the future of GitHub.

Thoughts on the GitHub ecosystem

I was not part of the “mass exodus” from GitHub in 2018 after Microsoft completed its purchase of the platform. At the time I thought that this could only be good for the site, however, now I’m reconsidering, especially in the light of the situation above. Let me explain why…

GitHub Actions is what GitHub calls its “world-class CI/CD” system. CI/CD has been supported by Actions since August 2019 and is free for open source projects - GitHub has “embraced” CI/CD.

Travis dot org is now a competitor to GitHub rather than the helpful addition to the ecosystem it was before.

Also the existence of CI/CD in Actions means that GitHub can allow the degradation of other CI/CD integrations because it’s able to offer a “better” replacement - use Actions instead. My guess would be that GitHub intends Actions to replace all CI/CD building on GitHub for open source projects.

In the final paragraph of the GitHub blog post above, Nat Friedman states:

Our vision is to serve every developer on the planet, by being the best place to build software.

Building software includes CI/CD and GitHub’s vision means that every developer that needs a CI/CD function would stay on GitHub while “building software”, not traverse external systems like Travis, Circle CI or Codeship.

Since GitHub (and therefore Microsoft) acquired Dependabot in 2019, GitHub now has a tool which it can use to generate a larger number of builds on CI/CD services integrated with its platform like Travis. This will have the knock-on effect of making it harder for those CI/CD services to keep within their API rate limits and more expensive to run because they will need to buy more computing power from AWS and/or Google to run builds.

Best of all for GitHub, they can put this pressure on others while maintaining the guise of making “dependency upgrades easy”. Now GitHub automatically creates a pull request for any project owned by an account with security alerts enabled when it finds a relevant security vulnerability alert.

In the case of the pull request above that started this post, that was a vulnerability in bleach. As I mentioned this is a project used by over 60k projects on GitHub. So when a security advisory on bleach occurs, Dependabot creates a pull request on GitHub, each pull request will then be built by a CI/CD system for those repositories that have one wired in. For an external CI/CD system like Travis, that flood of builds requires a large volume of computing resources and GitHub API calls.

The GitHub rate limit documentation currently states a quota of 5,000 requests per hour. If each CI/CD build requires 2 API calls (one to say “in progress” and one to post the result), then once 2,500 builds are completed in an hour the quota will be exhausted. If 4% of all the repositories that depend on bleach are using Travis for builds, then a single bump to the bleach release would exhaust a 5,000 request quota immediately - and that’s before any “normal” human-driven regular build activity is taken into consideration.

Now I’m pretty sure that Travis has an hourly quota that’s greater than 5,000 requests per hour, probably granted to them when GitHub saw them as augmenting the GitHub ecosystem, but when the Travis email above stated:

We are following up with Github via various channels to get the requested API rate limit increased.

… why would GitHub bump this now?

Instead, GitHub can leave Travis in an awkward situation: choose to throttle builds and get reliable status calls back to the GitHub API, or make open source projects have a less reliable and smooth experience when status update API calls are dropped. Either option makes GitHub Actions look “better” as a CI/CD solution - a win for GitHub.

I hope that my thoughts on the GitHub ecosystem above are overly negative and that these issues with Travis are not the start of an “extinguish” strategy by GitHub towards external CI/CD systems (see Embrace, extend, extinguish).

I hope I’m completely wrong and that GitHub open up their API limits to Travis so that open source projects like Flake8-AAA can still use it for reliable CI/CD. But if things don’t go well then I’m certainly more ready to join the GitHub exodus, just 18 months behind the curve.

Thanks Travis CI for all the builds, I hope we have many more to come!