Factories build instances of models, primarily for testing, but can be used anywhere. In this post I present my attempts at grading different factory libraries available for Django based on the validity of the instances that they create.

You’re a much better programmer than me - I’m a bad programmer. I make mistakes, lots of them. I often forget to validate my instances before saving. In order for my tests to be more dependable and solid, I’d like whatever object factory I use to look after me by validating the generated instance before it reaches the database.

This is the way that I’ve been looking at Django model instances - for a single model we can imagine sets of instances which might look like: 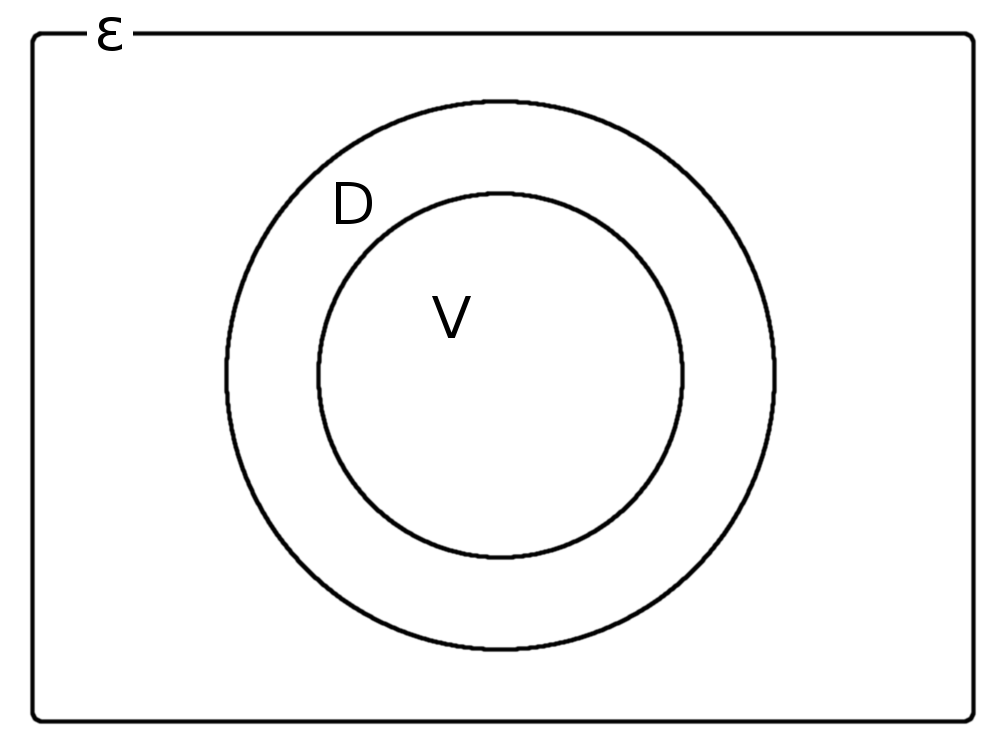 The main issue is the set D/V of instances. These are all the instances which can be saved into the database but are considered invalid by Django.

When factories create instances that reside in this D/V set, they create instability in the system:

We could argue that way in which Django does not call full_clean before it writes instances to the database is the root of the problem - I’ve previously written and spoken about this. However, this is more a “condition of the environment” and therefore something that we need to manage, rather than fix.

Also, look at it another way. Any factory that integrates with Django can inspect the target model and immediately find the constraints on each field. Therefore with Django, factory libraries have all the information they need to build a strategy for creating valid data. On top of that, Django provides the full_clean function so any generated data can also be checked for validity before it’s sent to the database. Why should we have to re-code the constraints already created for our models into our factories? This looks like duplication of work.

So let’s explore how different factory libraries deal with this problem of instances in the D/V set - the white of the fried egg in the diagram.

The following factory libraries have been explored:

The code used to test the factory libraries is available in the Factory Audit repository. For each factory library, two factories have been created in a default state, one targeting each of the test Models:

The goal is that each factory should reliably generate 10 valid instances of each model.

Wherever possible I’ve tried to be as explicit as possible and import the target model, rather than refer to it by name as some factories allow.

Each factory library has been graded based on how its default configuration behaves when used with the Item and User models.

The gradings are based on the definition of “valid”. Valid instances are ones which will pass Django’s full_clean and not raise a ValidationError. For example, using the ItemFactory a generated item passes validation with:

The tests on each of the factories have been written to pass when the factory behaves to the expected grade. For example, the test on Factory Djoy’s ItemFactory expect that it raises ValidationError each time it’s used and is therefore YELLOW grade.

Thanks to Piotr and Adam who pointed out some issues with my grading system.

Adam pointed out that collisions are still collisions, even if they are unlikely. Therefore, even if factories are employing fantastic strategies for generating valid data, their generated instances should still be run through full_clean before save.

I agree with this opinion and think that calling full_clean on every instance creates the opportunity for two benefits, over and above asserting that every instance is valid:

I’ve added a “Uses full_clean” field to evaluate each factory and capture this information.

Piotr pointed out that the results of the grading are inconclusive since I don’t agree with the results. For example, in the original results Mixer is the only library that has GREEN GREEN and therefore we would assume that it is the best of the factories tested. However, that’s not the case, since I found it hard to use and its exception bubbling was also intrusive.

I’ve added the “Ease of use” grading to capture this information based on my experience working with each factory.

Results with additional “Uses full_clean and “Ease of use” information:

Notes about each library

Grading each library was often harder than I thought it would be because many don’t fall into one grading or another. Where that has happened I’ve noted it below.

Factory Boy has no automatic strategies used for default factories and so it fails this test hard. If the library was extended to call full_clean for generated instances before saving then it could be upgraded to YELLOW.

Factory Djoy contains only one simple strategy for creating Users. It has no inspection ability to create strategies of its own based on Models.

Model Mommy depends on its strategies to create valid data and does not call full_clean meaning that IntegrityError can be raises when collisions occur. It could be argued that it should be downgraded to YELLOW because IntegrityError is raised.

And the winner is?

What is the best factory to use? This is a really hard question.

These factory libraries generally consist of two parts and different libraries do each part well.

My current advice is to use Factory Djoy, or wrap your favourite factory in a call to full_clean.

Yes, there is a performance overhead to calling full_clean but my opinion is that eliminating the D/V set of invalid instances is worth the effort and makes the test suite “fundamentally simpler” [1].

My future thinking is that if Hypothesis can improve its interface to Django it could be the winner.