Over the weekend I spotted a tweet from Oliver…

And I jumped straight in with…

@OliverCaldwell Squash, but keep detailed commit messages. Unless you have a particular use-case / reason not to.

Then, as part of our following conversation, I drew a picture: 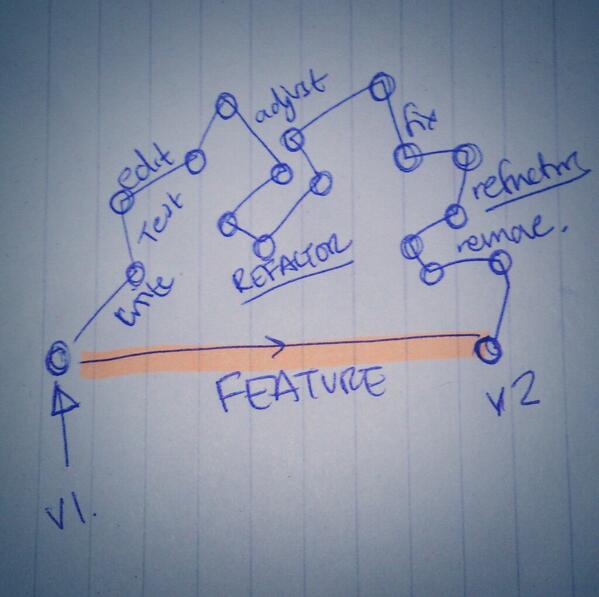 This is how I see it. Better to keep the direct route rather than the “how we got here”.

It’s about more than just squashing

What I realised while writing this post and experimenting with git is that the issue is not as simple as “Squash? Yes / No?”

Variables to consider include:

For a simple project with no sharing between devs required and regular releases, then squashing features seems like a good idea if you:

One of the issues that Oliver raised was about losing history.

@jamesfublo I suppose so. Squashing just feels like you're killing off that fine grained history, like when was that two line change made.

So, since I advocate squashing and branch deletion, I’m therefore suggesting that the reflog is used to recover detailed history in the local repository if required.

So let’s explore how much history is actually kept…

Reflog is a mechanism to record when the tip of branches are updated.

Every commit that every branch in your local repostitory has ever pointed to is kept in the reflog.

And this even includes branch switching…

Sounds very warm and cozy, BUT there are conditions, so let’s do a practical experiment with a test repository.

Make a repository with an initial commit.

Create a README.md file and put a line of text into it and commit - this commit is called A.

In a new branch, we create a feature to update the README with two new lines and to delete the first line.

feature-a is ready to bring into master. Let’s first cleanup our history by doing an interactive rebase. We use a candidate branch for this work because it’s a nice safety net which can help with testing.

Let’s squash our three commits into one.

And now we merge together the three commits, describing the activity that took place. We keep the messages so that history is clean, but informative. We also include a reference to the ticket we are working against:

The reflog shows us that there is a new commit d0445b2, we’ll call this E. This is the commit that results from the rebase and leaves the tree looking like:

This is a good stage to test everything and to check that your tests are what you expect them to be, ensure that no information has been lost.

The new commit E is the patch for our feature which we now merge onto master.

At this stage the feature would usually be pushed to a branch on origin.

Note that we’ve only shared the squashed E commit, not B, C or D in the feature-a branch.

We can then cleanup our working branches. First the candidate.

As Oliver noted, the feature-a branch can just be kept by the developer in their local repository to preserve the full history - that is certainly an option.

@jamesfublo I suppose you can still keep the unsquashed branches in the repository. I never used to squash, but I might start.

However, I prefer a clean working repository so I like to delete the feature-a branch.

Clean up the feature branch

When deleting the feature-a branch git requires the -D flag to force the deletion. git does not work out that E is equal to B, C and D combined, so thinks that history could be lost.

B, C and D are now hanging commits

This is a part of it:

The development commits from the feature development are still available and could be checked out into detached HEAD state and inspected, played with, rebranched. Let’s try that.

Now play and explore as much as you want.

When you’re ready, move back to master.

And git warns us that we’ve left behind our hanging commits:

How long are hanging commits kept?

But how long will these unreachable commits hang around for?

Hanging commits are removed from the local repository by garbage collection, known as gc, or by manual removal.

There are various settings which gc will use to determine which commits should be cleaned before the repository is repacked.

gc.reflogExpireUnreachable tells gc how long hanging commits should be left in the repository. Default value is 30 days. Adjust this to a value that you feel comfortable with. You can make that setting on any of the normal levels - global, system or local.

Hey - you want to keep all history in the reflog for ever? Here’s a setting:

I’m happy with the 30 day default myself!

For more detailed explanation, checkout the Configuration section of the git-gc man page.

Just for experimention, I tried to clean the repository of the B, C and D hanging commits. This was challenging because my default settings prevented reflog and gc from performing the clean, however I found this SO answer helpful.

There are now only two commits in the repository:

So fresh and so clean!

At the end of the day, the dev team (even if that’s just you on a weekend project) decides how best to keep history and share features.

My general solution is for:

Remember there can be a full 30 day history (or longer depending on the gc.reflogExpireUnreachable setting) in the local repo which hasn’t been pushed to origin. It’s this history that could save your bacon one day - so consider backing it up!

See also this comment on GitHub from Curt J. Sampson with some great points about when not to squash. One helpful excerpt:

I think of a set of commits I’m proposing for master branch as a story I’m telling to the other developers. Make the story as clear as possible, divided up into reasonably small chunks where you can do so. This will make other developers love, rather than hate, reviewing your code.

Thanks Curt - spread the love!